Cerberus had a major headache.

To be precise, he had two major headaches. Two of his heads had been beaten black and blue, and each lay crestfallen and on the verge of death. The third and final head was being humiliatingly pinched in someone's very large hand and could not move.

From the gaps between those iron-like fingers, Cerberus glimpsed an unclear face that always seemed to be shrouded in darkness. But he did catch what appeared to be an expression amidst the darkness. The attacker looked almost...amused.

It looked like this head would soon say goodnight as well. Cerberus closed his third pair of eyes, resigned to his fate.

More than a year ago, this same uninvited guest appeared mysteriously in Black Gate Isle and made up his mind to reside here. Since that time, to declare his dominion over this territory, Cerberus had tried to challenge the intruder and suffered crushing defeat eight times.

Admittedly, three times the reasons were actually because he was hungry, or had nothing to do, or was sleepwalking. The other, more legitimate times, he was able to bounce back after a month or two thanks to his powerful recovery capabilities.

But this was the ninth time, and the invincible Cerberus seemed to have encountered his nemesis.

Patience was not Cerberus's strong point. After he closed his eyes to prepare to die, the seconds seemed to pass like years. However, the iron fingers around the head defied the three-headed dog's expectations and remained indifferent, aloof.

While feeling like a hundred claws scraping his mind, the iron fingers suddenly relaxed. Fearing that a powerful strike was brewing, Cerberus opened his eyes in terror, only to find that the uninvited guest was standing several meters away.

"Give up resisting?" It turned out that the uninvited guest was no mute.

Cerberus let loose an ambiguous growl, shaking his heads. The three-headed hound was always rushing around and picking fights, but this time he did not hesitate to bow his heads and admit defeat to his clear superior.

What's more, after escaping with his life nine times in a row, Cerberus was not foolish enough to attribute this to his own strength. On the contrary: the uninvited guest had shown Cerberus mercy because he bore no malice.

"Don't you wish to see something beyond this black sea?" The uninvited guest's voice was unexpectedly compelling.

Beyond the black sea? Cerberus followed the uninvited guest's eyes toward the distant black sea, licking his sharp fangs.

What Cerberus did not know is that the Black Gate on which he lived was merely a tiny, unremarkable island off of a mysterious continent. He had also never bothered thinking about what was on the other side of the Gate. After all, swimming is not a hobby beloved by fiery three-headed dogs.

The three-headed dog had had enough of the uninvited guest's endless abuse (he seemed to have forgotten that it was he who provoked the uninvited guest and put his necks on the line each time). Perhaps another place might have powerful and interesting people he could defeat. Cerberus's six eyes ignited with an excited brilliance.

Several years later, at the center of Baa'tor, consummate conqueror Cerberus stood proudly. The uninvited guest in front of him faced the subdued continent with arms outstretched.

"This continent will now be called Hell. And I, the Dark Lord Padrino, shall rise again!" 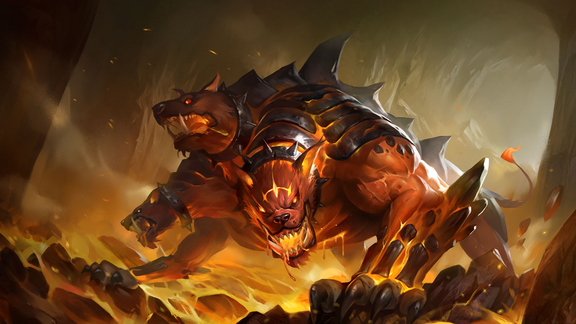