The Dawn of Light

"No Darkness, no Light." The first time Lumenor heard these words, he did not understand what that drunken ranger from a foreign land meant.

Undoubtedly, the Temple of Light is the holiest place in Etryna for the humans from Latoc Polis, the wood elves from Baleriand, the dwarves from Hurricane's End--almost every follower of Etryna's numerous gods.

As a spokesperson for one of these gods in the mortal realm, a priest from the Temple is capable of guiding its followers and possesses the undeniable right to speak. Those far above the normal temple priests, the Dawn Priests, with their mighty magic and overwhelming power, have even more authority.

No wonder why Lumenor's parents took advantage of their relationships and even willing to go bankrupt just in order to stuff Lumenor into the lowest level of apprentices for the Temple of Light.

Although they did not dare expect Lumenor to become a Dawn Priest -- only the nobles enjoyed that privilege--they expected him to just learn a few spells from the Holy Light or be fortunate enough to win the attention to become an attendant of the priests, which would be honorable enough for commons.

The childless wood elf couple adopted this mysterious high elf child, initially because he looked pitiful, and after so many mornings and evenings spent together, they had long viewed Lumenor as their own child. As Lumenor grew up gradually, the differences in appearance between him and the other wood elves became increasingly obvious. The rumors in the woodlands occasionally reached his parents' ears.

It was time for Lumenor to leave the woodlands and set out on his own.

"My dear, may the Holy Light be with you." Lumenor strapped on his pack, the hope in his parents' eyes was still vivid in his mind. "Remember to come back and teach your people some Light magic. We're waiting for you!"

His childhood pal, Selene, was so reluctant to see him leave and waited until that 13-year-old silhouette disappeared in distance.

In a blink of an eye, two years had passed since Lumenor began his apprenticeship. Besides the fact that he grew physically, he did not see even a shadow of this so-called Light magic.

Based on what he heard and saw, Lumenor gradually understood that the so-called apprentices were merely grunts for the temple priests to order about. "But what else can we do? Hoping those high and mighty priest lords come up with a whim and show a little apprentice like you some insight into the Holy Light?" His companions seemed had already accepted their fate as apprentices. "Stop day dreaming. If you don't go fetch the wine quickly, a priest will discover you loafing around and you'll be toasted!"

Soon, Lumenor was seen dragging a giant flagon of wine on the street. The conversation with his companion still distracted him, as he tripped on the legs of some strange fellow lying in front of a tavern door and got a mouth full of mud while the wrought copper flagon rolled farther and farther away, clanging around. Lumenor would certainly to be blame on if he just returned like this. A punch in the face was inevitable.

Anger risen in his head, Lumenor climbed up and turned back, demanding compensation from the drunkard. He was just about to burst into rage when he realized the drunkard was actually a foreign ranger.

The Brewmaster's fine ale was widely renowned, with so many drunkards lay in front of the tavern's door. However, this one was quite unfamiliar.

The ranger seemed have lost his way, or faith.

"Arrogant Dawn Priests...pah, those creatures from the darkness have been silenced for only a few hundred years and they've already been corrupted like this! Complacent! ...When the army of Dark Lord return to slay you all, you'll be relying only on those aristocratic idiot priests..."

The ranger seemed quite pissed about the Temple of Light, rolling over while muttering and snoring.

Lumenor wished no entanglement with this drunkard. While the ranger continued his somniloquy, Lumenor took the flagon and walked straight into the tavern.

He did not know why, but he felt some unease in his heart.

Several months later, news suddenly arrived that the Army of Darkness was invading Etryna, with Baleriand bearing the brunt of the first attack. Countless elves were slaughtered. Lumenor was shocked by this news and nearly collapsed.

Earthshaking changes were occurring on the continent of Etryna. With the arrival of the Army of Darkness, the Temple of Light finally had its rude awakening. Light spells were taught to thousands of followers of the Holy Light burdened with vengence, like Lumenor, to launch a desperate fight against the Army of Darkness.

Years passed after the Army of Darkness's temporary retreat.

Those who were formerly young apprentices went through fire and flame in bloody battle under the radiance of the Holy Light. Deep-rooted hatred on the Darkness and the gifts granted by the Holy Light were relied upon to grow the priest attendant into a great Dawn Priest.

Once the dust settled, Lumenor sat on the highest point of the Temple of Light, overlooking the devastated land. He finally understood the meaning of that word.

Without the Darkness, what is the meaning of Light? Without having experienced the most desperate darkness, there is nothing to keep watch over the most glorious light.

A strange smile appeared on the face of the Dawn Priest. 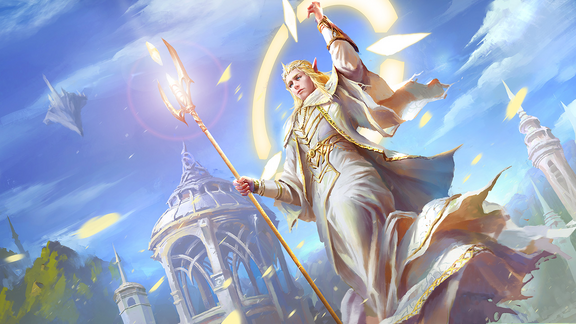