Mog, the Gatecrasher is a Tank that belongs to the Dark faction. He is the most durable hero in the game and is a powerful addition to Attack-focused teams. Launch propels heroes behind him, exposing the entire enemy team to his Red Terror, which, combined with basic attacks, can be used to slowly wear down enemies. Sweeping Blow serves as a finisher, dealing massive damage while he is low on Health. He is best used with health regeneration items.

Players can unlock Mog by summoning him at the Tavern.

However, if you insist on making the ogres a cookbook, the rhinok, the continent's bravest and fiercest race, should absolutely not appear within.

This is not because rhinok meat is smelly or tough. In fact, ogres, gourmands that they are, would never mind trying something a bit chewy. But to risk their lives for it? Even the ogres, not exactly known for their wisdom, are not that foolish. After eating and drinking, the only thing that has more appeal for an ogre than smashing a hundred goblins' heads is finding a dark and quiet place for some beauty sleep.

However, few people know this, and a few unfortunate fellows have been forced to face an ogre's most manic side after straying into the campsite of a sleeping ogre. Even the bravest rhinok fighters dare not provoke the anger of a recently awakened ogre.

Therefore, the vast majority of ogres and rhinok live peacefully on the continent of Etryna, pretending that they don't know that the other race exists.

The only exceptions are the Sledgehammer Tribe of ogres and the Thunderdrum Clan of rhinok on the Pantos Grassland.

The long-standing hatred between the Sledgehammer Tribe and the Thunderdrum Clan is particularly hard to believe given that the two races seem to have no intersections.

"BOOM! BOOM! Thunderdrum! BOOM! BOOM! WOOO WOOO WOOO!" The laconic rhinok rocked and shook the earth endlessly, their noise resounding throughout the Pantos Grassland. The magic sounds filled the ears of the countless ogres in the neighboring Sledgehammer Tribe, making them toss and turn, forcing them to stuff their ears with stone and mud.

The frenetic ogres brandished their giant sledgehammers and charged toward the Thunderdrum Clan, wanting only to smash whatever was making that terrifying noise into pieces. This was the prelude to a protracted war.

Time passed and the war between the two peoples continued without end. It went on for so long that everyone forgot how it began in the first place.

The ogres of the Sledgehammer Tribe were even long accustomed to sleeping soundly with the Thunderdrum noise far in the distance.

Mog's most glorious exploit was defeating Titus Thunderdrum, known as the finest warrior of the Thunderdrum Clan, in single combat. The years of war left Mog very clear on how strong this well-matched opponent was. Therefore, when he started waving his sledgehammer like the hundred battles before and easily shattered his opponent's weapon, and then his skull, Mog's little brain was full of disbelief.

Taking in his victory, Mog saw an unfamiliar figure in the distance. That smiling figure exuded an atmosphere that made Mog uncomfortable. But ogres love victory, even if the source of that victory is unclear. Mog brandished his sledgehammer and roared into the distance.

The protracted war came to an abrupt end. Both the reckless rhinok and the obtuse ogres gradually realized that while they were too busy fighting each other to look around, a number of suspicious uninvited guests had appeared on the Pantos Grassland. Nevertheless, Mog did not understand what this all meant until one day when some sneak nearly cut off his head while he was fast asleep in his cave, leaving a long, shallow wound around his thick neck. The only reason the ogre's big head is still on his body now is because a stranger who did not look so bad repelled the assassin just in time.

Even Mog knew: assassination is not the rhinok's fighting style. Based on what he heard from his savior, who claimed to be a messenger from the underworld, Mog finally figured out why the followers of the holy light were constantly eyeing this land and wished to put him to death. When the first rays of dawn arrived the next day, Mog picked up his sledgehammer and walked out of his cave.

Although the Thunderdrum was still, Mog knew that he had no shortage of enemies. Scum of the Holy Light, Mog hungers! 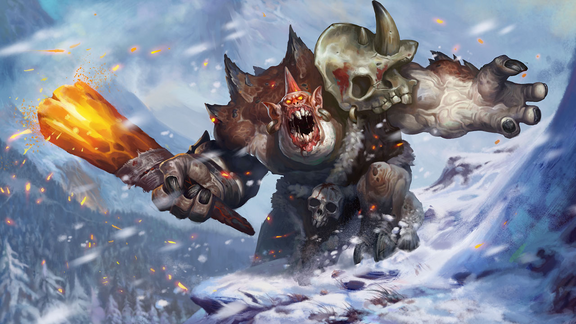