Monto, the Minotaur Chieftain is a Tank that belongs to the Chaos faction. His balance of Attack and Spell Power, combined with his high HP, suit him as a tank for burst teams. Sinkhole deals a large amount of damage and vacuums enemies into a small area, setting up area damage combos with heroes such as Kon-Kon. Primal Bellow allows him to quickly regain lost Health. Honor the Ancestors is a powerful knockback skill that can be used to herd your enemies or run them down.

Monto is widely perceived to be the strongest early game pick of the three starting options and is useable even in the late game, especially for burst teams. However, as a Chaos Tank, he is superceded by more durable options, such as Loshod and Rhagavar. Players can unlock Monto by selecting him at the start of the tutorial or by redeeming him from the Duel Exchange.

The Mulgori tribe of minotaur is known as the most complacent tribe in all of Etryna. They haven't experienced a single civil war, power struggle, or political misstep in their history of more than 1,000 years. Part of this can be attributed to their relatively inaccessible settements, a cliffside at the border between the Gauguin Mountains and the Gallop Highland. But mostly, it should be attributed to their ancient political process, created by their ancestors to prevent any future disagreements from ever happening.

Whenever the Mulgori to make a decision, they always perform a sacred ritual:

Write down all possible solutions on slips of paper, put the slips of paper inside the Ancestral Barrel, then go to the Prophet's Hill, and roll the barrel down from the hill. The barrel has a small hole in it and the first slip of paper to fall out from the hole is the solution they'll decide to go with.

No one can control the result from the Ancestral Barrel, except for the spirits of the ancestors themselves.

The Mulgori believe in this system so deeply that, even if a solution seems strange, they'll wait for decades before they question what their ancestors really meant.

The Mulgori are perfectly accustomed to this lifestyle. They even rely on the Ancestral Barrel to decide what time to wake up the next day, and the bride and groom for a marriage.

When the old Mulgori chieftain passed away, the tribe needed to decide on a succession. The names of every warrior in town was written on a paper slip and placed inside the Ancestral Barrel. The first name that slipped out was "Monto". The tribe fell to silence, then they all began to cry in laughter and grief. "Haha, the Mulgori tribe is truly done for!" No one really questions the ancestors' choice, but it was hard to understand.

Monto is the tribe drunk, a dreamer who talks the ear off of anyone who will listen. He's a great warrior, but hardly leadership material!

Those bloody ancestors messed it up again! Thought Monto bitterly.

As the new chieftain, he was required to carry the Ancestral Totem Axe on his back at all times. An uncomfortably large pole, about twice his own height, was strapped to his back for several weeks now. It is said the totem had the memories of ancestors embedded into it. The burden is excessively heavy.

The Mulgori shamans have cast centuries worth of enchantments on the axe, making it nearly unbreakable. Monto wished they had cast a spell to make it lighter, too. It felt silly that he should be forced to carry such a large weapon, when the Mulgori tribe hasn't been attacked by an invader for hundreds of years.

However, one day, a large figure came rushing towards the village from the distance. The entire tribe were gathered, some cowering behind Monto. The village hasn't had a visitor in years, and nothing good could be rushing at them with such urgency.

The figure drew closer and closer, and now the Mulgori could all hear its terrifying scream. Some of them recognized the beast an ape, an HUGE ape. Few of them realized it was Kon-Kon, the Giant Fist, a savage warrior from the Gauguin Mountains.

Monto recognized Kon-Kon, and readied his Ancestral Totem Axe in his hands.

When Kon-Kon drew near, Monto blocked his way, so that he could ask him what he was running from - or where he was running too. Kon-Kon was in too much of a panic to speak clearly, and only let out ape-like grunts. The Mulgori were frightened by this behavior, and perceived Kon-Kon as a threat.

"Monto, do something! You're the chief, protect us!"

Monto wasn't sure if Kon-Kon was aggressive or not, but he knew he had to do something to pacify his people. So he began reading a magical incantation that was engraved on his Ancestral Totem Axe, intending to cast a stunning spell. The spell caused little flashes of light appeared in Kon-Kon's face, but otherwise had little impact. Monto was concerned - this spell was supposed to be so much more powerful! Fortunately enough, Kon-Kon was terrified by the flashes, and ran away screaming.

Monto was disappointed that the spell didn't work, and that he couldn't end things with Kon-Kon more peacefully. However the Mulgori people saw it as a victory - perhaps they're not sure what a failure looks like. But Monto knew that his inability to cast the spell or communicate with the ape was a testament to his poor leadership skills.

The easy living of the last few centuries had soften the Mulgori warriors, and few of them have ever been tested in a real battle.

It was humiliating for him to know the truth. But Monto knew that, deep down, there must be someone inside of him who is ready to be chief. If there wasn't, why would the Ancestral Barrel have chosen him at all?

He believed the ancestors would never make the wrong decision, and so, he believed that he must have what it takes to lead the tribe back to greatness.

Later that night, Monto took the Ancestral Totem Axe to the Prophet Hill. He stared off into the horizon, wondering what plan the Ancestors had put in place for him. He was so determined that he didn't even notice several other Mulgori names were scattered throughout the hill, hidden in the grass.

A gust of wind blew the remaining slips of paper away. The true choice of the Ancestral Barrel remains unknown.

Monto held the Ancestral Totem Axe to the sky, and exclaimed, "Ancestors! Here I answer your call! I shall take my duty and lead my people back to their former glory again!" 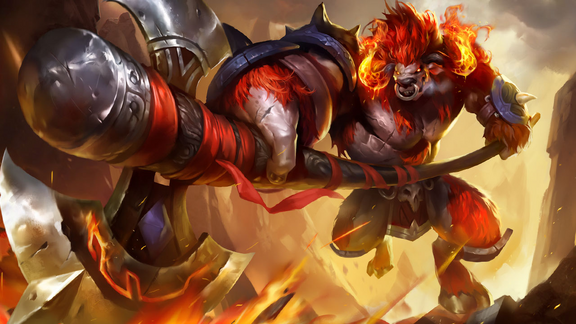