Cold. Biting cold spread in an endless void of darkness. Thanatos was dazed at the sight of oblivion above him. The ground beneath him was freezing. He gradually regained consciousness as frostbite crept over his body. His face was caked in half-dried blood.

Thanatos could smell a pungent odor from a large scorch mark in his back - a wound left by a light spell. He attempted to swallow, but his throat dry, as if it was full of sand. A splitting headache tortured him.

The bitter journey he had almost broke his body, and passing through the Black Gate nearly tore his soul apart. The only good news was that he survived. Thanatos stretched out on the ground and let out a burst of crazy laughter. But in doing so, he became painfully aware of his broken ribs. The laughter turned into a howl of pain.

He began to recall how he ended up in such a terrible position.

The Dark Lord was ambushed by a blinding light, cast by the God of Gods. As one of the Dark Lord's most trusted commanders, Thanatos was also affected. The servants of God of Gods pushed through and disintegrated the seemed dying orc shaman. Knowing that the war was lost, Thanatos punished the advancing army with a devastating blast of dark magic. This bought Thanatos and the Dark Lord enough time to retreat together - into the Black Gate. As the two escaped into the void, a powerful blast of light struck Thanatos in the back.

Thanatos's eyes began to adjust to the dim light. He struggled to raise himself up and look around. Before today, he was never sure he believed there was anything beyond the Black Gate.

The continent of Etryna was full of brave adventurers who passed into the Black Gate, but none of them were ever heard from again.

The wind was howling, blowing wisps of fog across a vast ocean. The inky black waves crashed into jagged reefs. Thanatos thought the beach didn't look that different from those of the Pandecic Ocean. There was no sign of life in this deserted island. No army dared follow him through the Gate. He realized he was alone - he must've been separated from the Dark Lord while passing through the Black Gate.

This dark land was very different from the Pluto Mountains where Thanatos grew up. The Pluto Mountains were not a pleasant place to live -- the orcs were always destroying everything -- but it was Thanatos's home, and he missed it. He knew he'd never be able to return home.

Thanatos staggered to a nearby boulder and rest his weary body against it. He looked down at a puddle left by the waves and saw his face in the reflection. It was mutilated in the battle. His helmet had melted into his face, forming a grotesque crown. Not even the most sharp-eyed wood elf would recognize him as an orc. He looked like a monster.

Fortunately, orcs were never much concerned with their looking. The orc he used to be was dead, and he accepted that. He slouched into the rock until his body could rest easy against the ground. He was panting, and could feel his broken body shutting down. He stared into the sea, contemplating his destiny and chuckled at the irony; he had survived the Black Gate, only to die on the other side.

The wind ceased, and the comforting roar of the waves turned into a dead silence. Suddenly, the sound of trickling was heard from the thick mist; someone was paddling a small boat towards him.

A dim light penetrated the mist, and the boat ran ashore. He could barely see the figure that stepped off the boat. Then Thanatos slipped out of consciousness. The stranger looked at Thanatos and sighed, "Another one..." 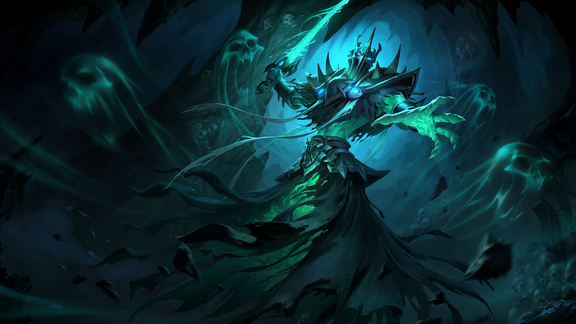